When I told most people that I went to Benicia over the weekend, the first thing they said was, “Where?” And then I excitedly told them how Benicia was the third state capital of California! (Mark: “Stop saying boring facts in a voice like they’re interesting.”)
Basically I was just planning our day around visiting a new tea place. The Camellia Tea Room was lovely, housed in an 1897 building with beautifully wallpapered tin ceilings. (Mark: “Yay, more history.”) The kids cracked each other up with haughty expressions while doing “fancy pours” of lemonade from their teapots, which meant they held the pot up high above their glasses. Somehow we got through this without spills.


And while we didn’t enter the State Capitol (that would have been a whole $10 for the 4 of us and this was no Sacramento capitol building), we did pass by it on our walk through the historical downtown on our way to the waterfront. I have to say Benicia is really an overlooked, charming little town.

We made our way to the beach at Elan & Cove Streets to check out Benicia’s little known sea glass beach. (Most websites mention a different location but a few people said this spot was the true sea glass beach.) We descended some steps in between houses to a deserted little cove. The kids enjoyed playing in the water and climbing on the rocks, and when we looked closely we saw a little sea glass. Definitely more than I’d seen before at a beach, but still disappointing.

But then a family came down the stairs. They led us to the real sea glass beach - I just hadn’t followed the coast far enough to the west of the pier - and there we found another cove and it was FULL of sea glass. I have never seen a beach basically paved in sea glass before - it was pretty magical. Julia got to work beachcombing and oddly enough we took fewer pieces back here than from the other beach simply because there was so much it wasn’t special any more. It was nice just to enjoy it. For some reason James enjoyed picking up big handfuls of sea glass and dumping it into the water to be “cleaned.”


Then after a full day of Benicia-ing we were tired and drove to Berkeley to visit our friends, Kelsi and Drew, and marvel at their 14 month twin girls and in Mark’s case, play hide-and-seek over and over again with their 3-year-old son who kept negotiating for more.

The kids surprised me on Memorial Day with a belated Mother's Day breakfast in bed. (I'll say "surprised" even though Julia was interrogating me on how exactly I prepare my oatmeal the night before.) Mark was out swimming, so apart from him cutting a lovely rose from the front yard before he left, the kids prepared everything on their own.
James picked some strawberries in the backyard (I love that he put on the gardening gloves to do it just like me), and Julia pulled over a chair and took down the heavy wood and glass tray (that we use for these occasions) from the top of the refrigerator. It's probably good I didn't see that part. They both cut four different kinds of fruits for me using a blunt table knife. (I would have let them use the good knives.)

When I got out of bed I found James at my door, blocking me in. He tried to distract me by throwing a ball for me to fetch in my room (uh, I'm good) and scratching my back (OK!). Then Julia lumbered down the hallway struggling to carry the heavy tray topped with two bowls of food, a tall glass of lemonade, and a vase.

They made me oatmeal with flaxseed, four fruits, walnuts, cinnamon, and jam, a four fruit salad (Julia zested some orange on top to make it fancy), and lemonade with two strawberries. Apparently they heated the oatmeal and then left it out for an hour, waiting for me to wake up.


They were very sweet and stayed with me while I ate.


Upon viewing the kitchen afterwards I asked. "Um, what did you cut the fruit on?" Julia: "The cutting boards that were out." Me: "You mean the dirty ones?..."

Ever since watching the second Harry Potter movie a week before, Julia has been afraid
to use the bathroom “because Chamber of Secrets.” I guess she thinks a secret passage
will open and a giant snake will emerge and petrify her. As an April Fool’s day prank,
Mark suggests writing on the bathroom mirror the same words mysteriously etched on the
wall in the movie. I also throw a bunch of plastic snakes on the floor. I worry a little that we
could traumatize her but instead when she sees the bathroom she laughs. (She also gets
over her fear in the following days so maybe this helped?) James declares that one of his
pranks this year is to prank my pranks so he takes a window marker and changes what I
wrote to “The chamberpot of secrets…”


I put a few drops of food coloring in their bowls and then cover the drops with cereal. It
all looks as normal until I add milk. They’re no fools and know it’s food coloring. I’m
pretty sure Julia rolled her eyes and said, “Mom-mmmmmmmmeeeeeee!”


James scurries about the house setting up his pranks. He puts socks on all the
doorknobs, swaps the identical TV remotes into opposite rooms, puts the empty
egg carton in the fridge in the hopes someone will open it, and adds sunglasses
to inanimate objects. He also decorates Julia’s dresser by hanging scissors and
necklaces from all the drawer pulls.

I take the cream out of one of James’s Oreos and replace it with toothpaste. When
James eats his cookie but doesn’t immediately notice a difference I ask if it tastes
okay. He asks, “Why?” and looks a little worried. I tell him what I did. “Should I spit
it out?” he asks. “I pretty much swallowed it.” I tell him not to worry about it and
give him another Oreo to make up for it. He notices right away that this one smells
like mint. Oops! Gave him the wrong one before!


Later I give Julia her vanilla Oreo while James watches amused since now he’s in on the prank. She takes a tiny bite - not because she’s suspicious, that’s just now she eats - and immediately knows something’s off.

A week ago I bought fresh squeezed O.J. so the kids would be used to drinking it every day and not be suspicious when I pulled it out for them to drink for the first time on April Fool’s Day. Except tonight I replace the O.J. with water mixed with mac n cheese powder. Right away they realize it doesn’t taste right. To make up for it I of course replace it with the real O.J.

After dinner I hear James talking loudly to his stuffed dogs “Wait, what are you doing?” “Goldie! No!” I come in and discover that his stuffed dogs had apparently all raided the costume box and are now wearing hats or wigs.

Epilogue: I didn’t think it was that mean to give the kids toothpaste Oreos and mac n
cheese water. After all, we played Bean Boozled (a gift from my mom’s friend,
Barbara) the day before and we willingly ate much worse tasting Jelly Bellies than
that. Flavors included spoiled milk, toothpaste, booger, rotten egg, moldy cheese,
and vomit. (For the record, the toothpaste flavor was the only one I didn’t spit out
because it didn’t taste that bad.) Mark strongly disapproved of my food-switching
shenanigans because he thought it encourages the kids to tamper with food. He
definitely has a point and I’ve decided not to do it again in the future, but I think this
one time was probably fine. (Unless they tamper with my food next April Fool’s. Then
no.)

Mark and I texted about the printer not working, possibly due to lack of toner... 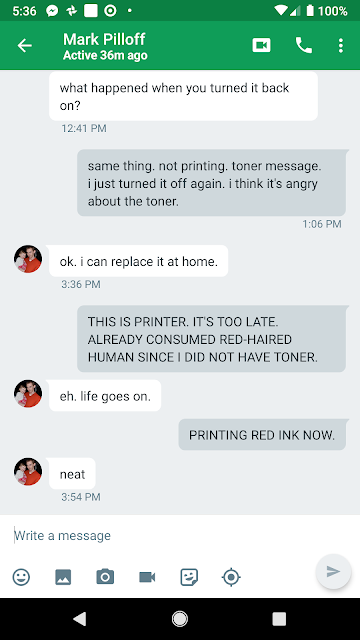 I showed this to Julia and she said, "When you run out of hair dye it'll be grey ink."
Posted by Kathy at 9:54 PM No comments:

This is how we roll here when it comes to kids' lunches...

*I actually use Trader Joe’s sunflower seed butter. Kids can’t tell the difference.
There isn’t a nut ban at school but that’s a swap I can easily make.


Other Stuff
-Yogurt (I do non-fat Greek yogurt with honey and a sprinkle of granola or non-fat strawberry with aforementioned granola sprinkle)
-Hummus and selection of veggies (carrots, cucumbers, bell peppers) and pita or crackers
-Cheese and crackers
-Cold leftover omelet
-Hard-boiled egg
-Pasta salad
-Skewers of fresh mozzarella balls and tomato chunks
-Teriyaki tofu (sold in a package at Trader Joe’s and I just cut up)
-Leftover sushi (soy sauce on side)

Unusual concoctions
-Whole garbanzo beans, chopped up orange, mint (if you have), olive oil
-“Cracker dip” (mashed garbanzo beans, lemon juice, olive oil, salt) and serve with crackers*
-Sushi using rice and a protein (salmon, chicken, tofu) or kappa maki with cucumber. Wrap with seaweed sheets they carry at the store (Nob Hill has). Cut one in half and roll it up, sealing the end with a little water. Do not cut or it’ll fall apart. Include soy sauce.
-Quinoa salad with fresh mozzarella, tomato, and basil (Julia loves this. We make it together for her lunch when we have more time. It’s her annual first school lunch)

*I like Ak Mak crackers because they’re 100% whole wheat.

*When using canned beans, I recommend rinsing them first because there’s a lot of
added salt.

Yumbox (Keeps each compartment sealed so nothing travels to another compartment.
Also has a small compartment for a dipping sauce.) Comes in lots of colors/variations. 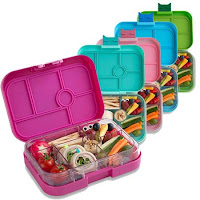 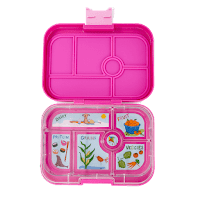 Yumbox comes in lots of different colors and has a variation that holds an entire sandwich.

Lock N Lock (4 compartments. Doesn’t leak or travel to other compartments.) Sometimes
I remove two compartments and put in something like a sandwich instead.


James eats a lot (he downs 1 ¼ sandwiches - sometimes more - while Julia eats less than a ½  sandwich), and his lunch doesn’t usually fit in either container any more. For him I stick his sandwich in a plastic bag and use a divided snack container for a veggie and fruit. I could buy the Yumbox that fits a whole sandwich but even that might be too small.

Best Lunch Idea Site
Kudos to the One Hungry Mama website and Facebook page. It has great kids’ lunch
ideas (including the sushi one) and some good dinner recipes as well.

And then if you’re not tired enough after making lunch, include a lunch box joke. (Actually
I like doing this. It breaks the monotony of making lunches.)

The kids gave me kisses and showed how well they know me. 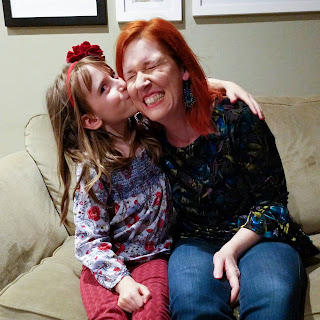 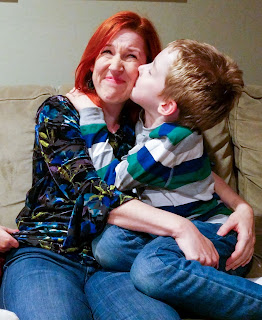 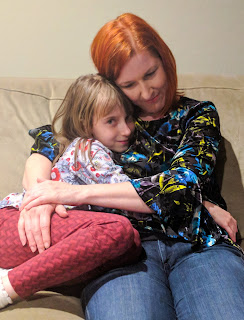