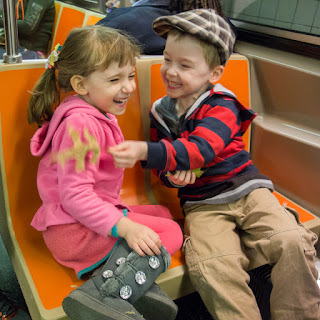 Day 1 in New York
We arrive at our Airbnb apartment on the Lower East Side. Because the A/C is propping up the window, leaving a big gap, our room is FREEZING. Thankfully the owner comes over the next day to fix the situation, but we spend the first night huddled under the covers to watch TV and no one wants to get out - kind of like when you have a fever.

Kids’ favorite part: “Meat sandwiches” (Can you tell we went to Katz’s?)

Day 2 in New York
Guest entry by Julia:
Today when we woke up it was REALLY scary. We screamed for Mommy and made her get out of bed because what we saw was so horrifying we couldn’t describe it. There was a blanket on our bed that was not there when we went to sleep!!! And it had tassels! It was terrifying!


The kids see fish in ice being sold at a market. Julia asks if they’re selling fish AND ice. Mark tells her the ice is just for the fish. “So it stays dead?” asks James.


We also spend the entire afternoon taking the subway to Brooklyn just to get pizza.

Days 3 and 4 in New York
We walk the entirety of The High Line. Dinner is at Robataya, a traditional Japanese restaurant where the chefs cook in front of you. They also perform death-defying (or maybe burn-defying) leaps over the hot grills in front of them - while wearing socks - to the counter to get ingredients and then back. Hearing the servers yell orders in rapid-fire Japanese to the chefs who respond “hai!” Julia asks, “Is that how people talk in New York?”

The next day we take the Staten Island Ferry because Julia - who was the Statue of Liberty for Halloween - really wants to see her inspiration up close. We visit Mark’s college friends Irene and Donna. Julia wants to know which part of the skyscraper is the scraper.

Days 5 and 6 in New York
We get about ⅙ of the way into Central Park when James needs to use the potty. We leave the park and by the time he finishes it’s too dark to go back. It gets dark way too early here, especially when we stay on West Coast time. (Incidentally, the same exact thing happens two days later - clearly when you’re exactly ⅙ into Central Park it’s time to drop a deuce - but this time James decides he can wait. )

While Bubby watches the kids, Mark and I see the play This Is Our Youth, and the kids have the time of their lives playing with a newly purchased set of Lego in the lobby of Bubby’s hotel.

James and Julia’s favorite part: New Legos and their favorite place in the world, the Toys R Us in Times Square

Days 7 and 8 in New York
We walk through Central Park which is simply beautiful in autumn. Julia has tantrums because she isn’t first going down the subway stairs and also because she has to put on her own hat. 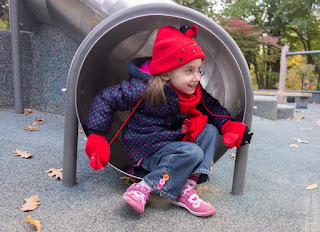 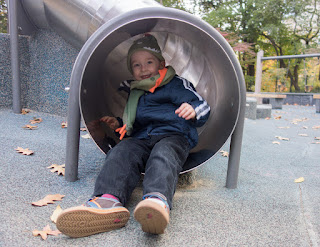 At the Adventure Playground in Central Park

Mark and I leave the kids with Bubby while we have a 3-course dessert at Chickalicious. Meanwhile, the kids walk up to friends and family (also staying in the hotel for the wedding) with a bag of Chex Mix, asking if they want a snack.


We go to the rehearsal dinner for Michelle and Mike’s wedding. Julia wants to sit by Michelle. (At the wedding she says she wants to dance with Michelle and also marry her.)

James and Julia’s favorite part: Playgrounds at Central Park, TV in the taxi

Day 9 in New York
See post. There was a wedding. And my kids were in it.

(Fancy panorama pictures by Mark.)
Posted by Kathy at 5:08 PM